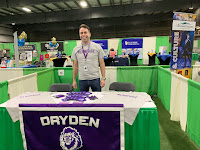 Recently, the District participated in the Central New York Teacher Recruitment Days hosted by SUNY Cortland. This was the first time the District has taken advantage of this opportunity and it was a great success. 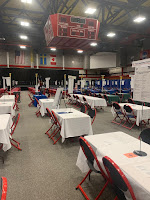 Teacher candidates come to the Teacher Recruitment Days from thirteen universities and colleges to interview for two days with public school districts from across the state, the East Coast, and California.

We used this opportunity to do screening interviews for teacher candidates for anticipated openings in our District.

In addition, the District also participated for the first time in the Cortland County Chamber of Commerce Showcase.

Participation in this event gave us the opportunity to network with businesses that could provide employment, partnerships, and internships for our students. This event also allowed us to recruit for positions in our District as well as spread the good work for Dryden. 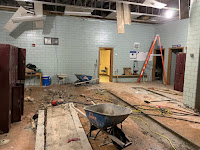 As students and staff vacated the District for Spring Break, construction crews descended on the MS/HS building to begin a lot of the demolition related to the project that is difficult to do when school is in session. 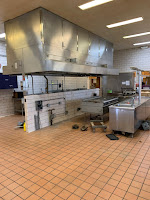 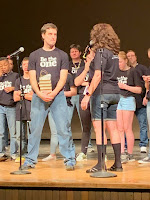 On Friday, April 12, the Dryden Middle School gathered in the Auditorium to watch their peers perform in the Variety Show. Middle School students spent the better part of March preparing for the show. Students and staff were treated to a fashion show, comedy routines, and a variety of musical acts performed by students and staff.

This is the Third Annual MS Variety Show, and it has become a Middle School tradition. It is a lot of fun for the participants and the audience.

A big thank you to Mr. Lee, MS/HS Biology Teacher, for coordinating and directing the show. In addition, the District would like to express its appreciation for the Middle School staff for supporting their students who performed in the show. Finally, a big thank you goes to Mr. Dobush from the Drama Boosters who did the lighting for the show. 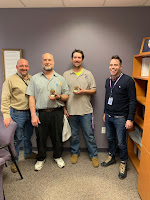 Recently, the #LionPride Award was given presented to Wilbur VanOstrand and Mark Burlew. Mr. VanOstrand and Mr. Burlew are Buildings and Grounds staff members who help support traffic flow during the MS/HS morning drop off. 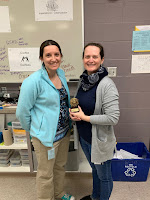 They go above and beyond each morning greeting our families with a smile and a kind word while assisting students with all of their instruments, skis, athletic equipment and bags.

There is not a valet service in the world that is better than the service that Mr. Burlew and Mr. VanOstrand provide during morning drop off.

In addition, HS Social Studies teacher, Lori Welsh, was also awarded the #LionPride Award for all the work that she does above and beyond the call of duty not only for her students but for her colleagues as well.

Ms. Welsh, Mr. VanOstrand, and Mr. Burlew are a credit to the District and make us proud to be part of the #LionPride. 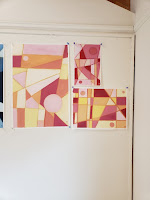 We are very proud of her and her art work. #LionPride

The "Be the One" Campaign Continues 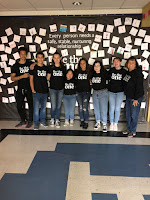 The Dryden Central School District continues to participate in the Tompkins County "Be the One" campaign which focuses on the idea that every person deserves to have at least one stable, nurturing and healthy relationship.

All of our schools have been talking with students about how they can "Be the One" for someone else as well as helping them identify the healthy and positive relationships in their worlds. 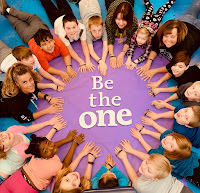 Mrs. DePaull's Third Grade Class worked together to create the picture to the right with the "Be the One" Logo. Recently, our High School students traveled with Mrs. Mary Hicks, School Social Worker, to a youth summit that focused on aspects of the "Be the One" campaign.

Our participation in this campaign will hopeful help to create networks of students and staff who feel supported by those individuals they interact with everyday. 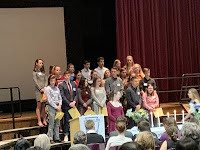 Earlier this Month, a new cohort of students were inducted into the National Honor Society.

In addition, the ceremony honors the history of the National Honor Society. Students and families celebrate after the ceremony at a reception in honor of the new members. 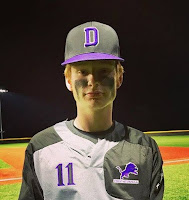 Congratulations to Sean Peck and the Dryden Lions Varsity Baseball Team for their win against Tully over the weekend!

Sean threw a no-hitter and came one hit batter from throwing a perfect game.

His performance earned him recognition from Prep Baseball Report-New York in their Super 16 performers from their weekend. 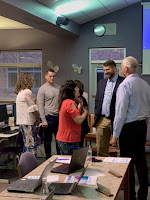 We are pleased and proud to announce that Mr. Kyle Colunio has been appointed to be the Dryden High School Principal.

Mr. Colunio is a veteran public school educator having served as a Math and Science Teacher as well as Technology Integration Specialist.

Mr. Colunio has two sons who are four and five years old. His wife is an Art teacher in the Watkins Glen Central School District.

Mr. Colunio will begin working at the High School on June 3, 2019. He is excited to begin his service in the Dryden Central School District.

Posted by Points of #LionPride at 9:57 AM No comments: