Spring Has Sprung...Athletics, Concerts, and Improvement in the Dryden Central School District 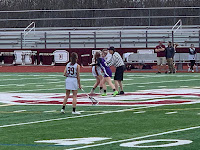 The Spring Athletic season always has a hard start due to Upstate New York weather.

This past Saturday the Girls' Varsity and JV Lacrosse Teams took on Johnson City in the Southern Tier, and although they did not come out on top, we are proud of their  on the field of play!

Baseball and Softball were not able to play their scheduled games on Friday due to wet weather, but we look forward to seeing them get their seasons started soon! As our athletes get started on their respective seasons, work continues on new softball and baseball fields. #LionPride

On Saturday, March 23, 2019, several Dryden Central School District staff members participated in a Polar Plunge event on Cayuga Lake.
The money raised by our staff members for the Polar Plunge will be donated to the Special Olympics. We are proud of our staff and their work to support this cause, and we hope that they have thawed out at this point. 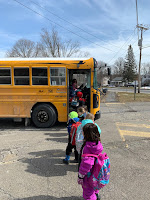 Our most recent #LionPride Award Winners have gone to students.

Earlier in March, Cassavant Elementary lost power due to an area wide loss of service that impacted McClean, Groton, and Lansing.

Students and staff at Cassavant bordered buses and headed over to their sister school, Freeville Elementary School, for the rest of the school day. 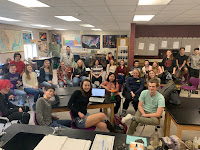 The #LionPride Award went to the staff and students of Freeville and Cassavant for being flexible and keeping positive attitudes during the situation.

Most recently, they have taken on a project to improve the climate of the high school by stressing the importance of treating others with respect and kindness. The District is grateful to the work and the leadership that this important student group has shown. 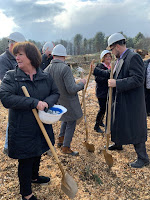 On March 18, 2019, members of the Board of Education, representatives from TST BOCES, Campus Construction, Hunt Architects, and the Leadership Team gathered at the new Transportation Facility to officially break ground on the project. It was an exciting event! 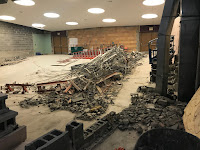 When the project is completed the District will host an open house for community members so everyone can see all of the improvements made to the District. We are appreciative of the community's support with the project.

Work continues in the MS/HS as the construction of new choral and music spaces are being built in what was C-13. In addition, work in what will be the new cafeteria kitchen has begun in what was formerly A-11. 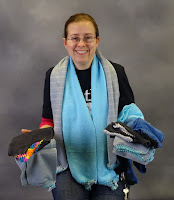 Students in Ms. Butts art classes benefited from a DYOF grant that allowed them to purchase materials to knit scarves, hats, and gloves for other children that were in need of these winter essentials.

Spanish teacher, Mrs. Rebecca Tice, also helped to knit some of the garments as well. Students at Dryden Elementary School were the recipients of this work.

We are appreciative of the generous grants that the DYOF gives our teachers and students that allow us to give to our community! #LionPride.

March is "Music in our Schools" Month 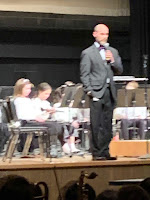 The Dryden Central School District celebrated "Music in our Schools" Month throughout March.

The month culminated in a concert  in the MS/HS Auditorium put on by the Lion Band from Dryden Elementary School, the Dryden Middle School Band, and the Dryden High School Concert Band.

All three bands performed together during the finale at the concert.  It is evident that many hours of hard work went into the concert. We are so appreciative of our Music Department and our student musicians!

Stories with the Superintendent

In an effort to connect with our younger students as well as encourage reading for enjoyment, the Dryden Central School District is featuring a new program called "Stories with the Superintendent".

Each Friday, a new storybook will be read by the Superintendent and captured on video. The video will be uploaded onto all three of the District's social media platforms-Facebook, Instagram, and Twitter.

You can catch up on the last two weeks of stories at anytime on any of the above mentioned platforms. You will find the superintendent reading The Book with No Pictures by B.J. Novak and Click Clack Moo by Doreen Cronin. Next week, we will be diving into some Pete the Cat!

March comes in like a lion and leaves full of #LionPride

March comes in like a Lion and leaves full of #LionPride 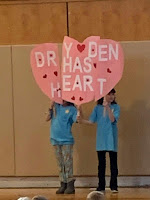 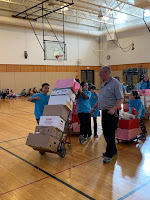 Throughout the month of February all three elementary schools collect canned goods and non-perishable food items to donate to the Dryden Kitchen Cupboard.

The three schools then come together at the end of Food Drive to celebrate this service to our community and present the donation to the Kitchen Cupboard in the form of a large "check". The assembly is spirited and focuses on taking care of each other and our community. This year the three elementary collected over 1,100 cans of food for the Dryden Kitchen Cupboard. 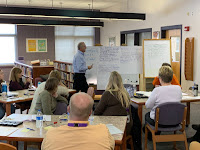 Earlier this month, teachers, parents, leaders, and board members worked with Sean Brady of Prism Decision Systems to develop an updated mission and vision as well as codify our core beliefs. This representative group worked for two days to do this work. 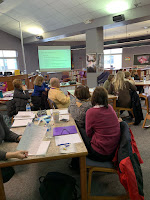 With a clear mission and vision established, the District will be able to make decisions that align to our beliefs, what we aspire to be, and why we exist.  The District is very appreciative of all the effort that went into this important and thoughtful work.

For the first time ever, the District will sponsor a Unified Sports Basketball Team this year. Unified Sports allows students with a disability to participate in school sponsored athletics in a scaffolded and supportive structure that allows the students to be successful while competing against peers from other schools.

At the end of February, members of the Dryden Unified Basketball Team traveled to the Youth Activation Summit  to learn more about how to support each other on the basketball court. We are proud of all of our Athletes.  #LionPride!

The Dryden Central School District is very proud of 11th grade Emily Miller. Emily qualified to compete in the New York State Track and Field Championships in New York City on Staten Island on March 2, 2019. Emily competed in the 3000 m. She had a personal record while competing in this meet and placed 22nd overall in New York State. Emily, Coach Stuttle, and Coach Weaver exemplify excellence. Just prior to the State Championship Meet, Emily was presented with the District's #LionPride Award. 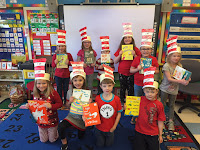 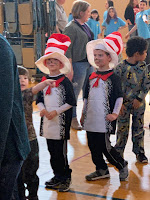 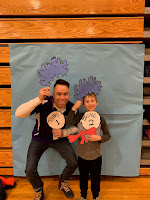 On March 1, 2019, elementary schools throughout the District celebrated Dr. Seuss' birthday. In the evening families gathered at Dryden Elementary School for Dr. Seuss Night. Students had the opportunity to read Dr. Seuss books and participate in games and activities related to some of Dr. Seuss' books.

What is your favorite Dr. Seuss book? Maybe you enjoy watching Sam discover that he really does enjoy "Green Eggs and Ham". Perhaps you like the classic tale of The Cat in the Hat and watching Thing 1 and Thing 2 cause havoc while Mother is out. Who does not enjoy the rhythm and the rhyme of One Fish, Two Fish, Red Fish, Blue Fish. Regardless of your favorite Dr. Seuss book, there is something for everyone at Dr. Seuss Night. Hope to see you again next year!

The District is very appreciative of all the staff and community members who worked so hard to provide our students with this experience, especially Mrs. Van Tassel and Mrs. Brown who co-chair the Dr. Seuss Night at Dryden Elementary School.

They're creepy and they're kooky. Mysterious and spooky; They're all together ooky. The Addams Family!

This past weekend the Dryden Central School District presented "The Addams Family: Musical". The community had the opportunity to attend Friday, March 7 at 7:00 PM and again on Saturday, March 8 at 2:00 PM and 7:00 PM.

The High School Musical is a proud tradition in the Dryden Central School District and a welcome relief to the long winter weeks preceding the performance. 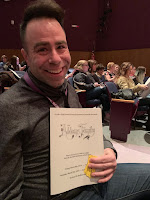 The all student cast spent over ten weeks building sets, rehearsing, and pouring their heart and soul into this work while still maintaining their academic course load and participating in other activities inside and outside of school. The District is proud of our students and their performance.

The District is grateful for the support of the Drama Booster Club as well as the many parents and family members who gave their time and energy to support the Musical. 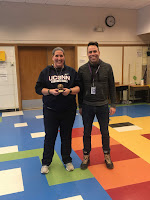 This past Friday, the Superintendent of Schools, had the honor or awarding our Adaptive Physical Education Teacher, Krista Gillette the #LionPride Award for her continuous advocacy for all students in the Dryden Central School District. Ms. Gillette services students in grades PK-12. She has a positive and empowering attitude which is contagious.

Ms. Gillette has been instrumental in bringing Unified Sports to Dryden as well as the founder of the Dryden Games. The Dryden Games is a regional athletic competition for students with disabilities. Ms. Gillette is always working to find ways for her students to access the world around them whether it be through athletics or helping them acquire the physical skills that will allow them to lead in an independent life.

We are exceptionally proud of Ms. Gillette and lucky to have her as a member of our Team! 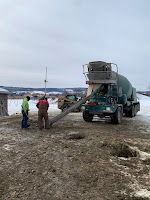 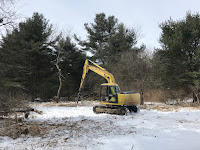 In addition to the Transportation Facility work, demolition work began at the MS/HS as well. The demolition work began in C-13 which will be converted into two music classroom and additional meeting space. Demolition work also began in the A Wing to prepare for the remodeled kitchen, remodeled MS cafeteria and construction of a new HS cafeteria. Consolidating the kitchen and cafeteria spaces in the MS/HS will allow the District to create efficiencies and the ability to provide better service for our students.

You can find more detailed updates about the project at the District's website www.dryden.k12.ny.us and click on the Capital Improvement Project button. You can view updates as well as project meeting minutes.

Posted by Points of #LionPride at 11:37 AM No comments: